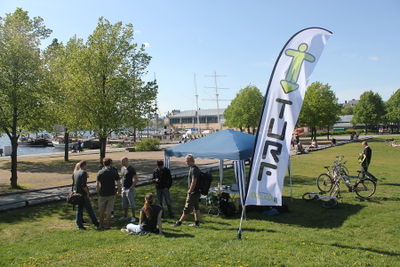 Of those who were there and were in the competition it was successful. It was a bit stressful for some to get there, but the weather gods were with turfers. Contest did not wait for anyone and it kicked off with a bang before some had arrived properly.

Some small mishaps occurred, however. No BBQ and a broken bike chain that destroyed the first place of Arias. Swype-SM was also reminded when eddyueue slipped in from the west on the path from the Stureplan and took a zone or two before he had to go back. Refreshments were available but also moved around (!?). Eric and Jossan shouted in chat about it anyway. Iostream was thirsty and wondered where they were.

The fact that Fredrick would take home the game was well not totally unexpected. A bigger Sweden-traveled TotalTurfer than him is hard to find. 24hoursTurfer. He was prepared and ready to go and frantically wrote about it in his blog. Jojje did a real impression after his cellphone mess after the start of the event when he dropped the phone on the ground so it became loose and a warm boot in response to it.