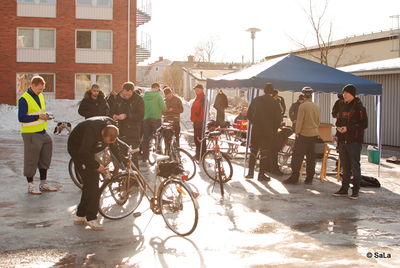 A Bonanza that took place in Sundsvall on 10 March 2012. Organizers were: Jojje, Stonecape, SaLa and Turftreken.

Takeoff was Dalgatan 14, where refreshments was available for purchase. The start was at 14:00. Road conditions were icy and snowy, it had been unexpectedly warm weather period before the bonanza. It was a tough fight. At 16:00 it was quick reassembly and after talk at the starting grounds. 18:30 was the dinner and awards ceremony at a restaurant. AgnetaPatrull won 'Berg Prize' because she managed to take a zone on North Hill first. The price consisted of a special shirt and dinner.