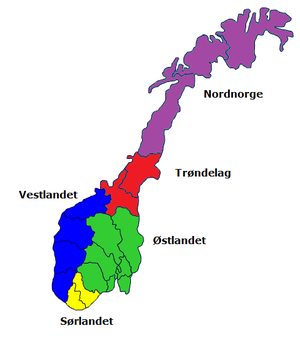 Map of Norway with the regions colored.

Norway is one of the countries where Turf is officially available. Turf was released in Google Play in Norway on the 2012-05-17 (The national day of Norway). At this time Turf was already available in Sweden, Denmark, Netherlands and South Korea.

The first zone in Norway was OsloCastle witch was created 2010-09-04 as a Tourist zone.

Norway is divided into five regions with a total of 1730 zones:

The regions may be further subdivided into these counties (fylker):

(Fastest to take 10 zones) in Norway.