Points is a central game element in Turf and is given to players who do a takeover, assist, revisit or keeps ownership of zones. The points ranks the players in different toplists, the League game and determines the players rank. 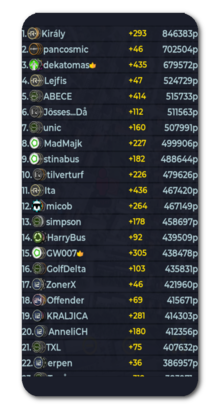 The points that players recieve are divided in two categories, takeover points (or TP) and points per hour (or PPH). These points are then also divided into two categories: total points and round points. Round points are points that the player have recieved during the current round and are reset for the next one. Total points are the total amount of points a player has earned throughout his Turf career and also indicate the player's rank.

When a zone takeover is made all players (the one doing the takeover and all assisting) recieve takeover points, (TP), but only the player owning the zone is given point per hour (PPH) from then on. Points per hour is recieved until another player takes ownership of the zone from you, or current round ends.

See picture: Example of what a toplist might look like during a game round in Turf. From left to right: Ranked, username, points per hour and round points.

Which TP a zone is worth is linked to its takeover frequency. The highest TP value on a zone is 185 and the lowest 65. For a zone you can thus get a maximum of 235 TP (185+50 neutral bonus) and a minimum of 33 TP (rounded) (65/2 revisit). Zones with low takeover frequency are considered more difficult to take and therefore generate higher TP. For the same reason, they have lower PPH instead. The number of TP relates to PPH according to the formula: TP=200-15*PPH.

Points per hour (PPH) is the sum of points a player recieves when owning one or more zones. The current point per hour is shown in the left top corner in the turf app. All PPH from the zones the player owns are added together and divided by 60 and are then continuously recieved every minute. It is therefore possible to recieve point per hour from a zone you have held less than one hour.

For a zone you can get a maximum of 9 PPH and a minimum of 1 PPH. What PPH a zone gives is linked to its TP according to the formula: PPH=(200-TP)/15. This means that all zones have given the owner exactly the same amount if the player is allowed to keep the zone for exactly 15 hours (200 points).

0-PPH-zones was a zone score option introduced infront of Round 41. These zones were all located in places where the turf activity was very low. During round 122, all O-PPH-zones were phased out and changed to 185/+1.

An O-PPH-zone was a zone that did not give any points per hour (PPH) and 250 take points (TP) at the take and was in an area with low turf activity. The reason why these were introduced 2013, was stated to be that the game developers wanted to make it less attractive for players to go to inactive countries and take over a large number of zones, in order to get many points per hour (PPH). The reason why 0-PPH-zones were phased out 2020, was to increase the attractiveness of players in new areas.

Using Tinkerbell, 0-PPH-zones could change value in the middle of a round instead of waiting for Fairy system - unlike other types of zones. The point adjustment took place when a 0-PPH-zone was taken three times during the same round. The score was then adjusted to 170/+2 immediately after the third take. If the first zone a brand new player took was a 0-PPH-zone, the score was adjusted directly to 185/+1.

Round points and total points[edit]

Round points are the points that a player has accumulated during the current game round. These points are reset after each round and are included in the total points.

Total points are the total amount of points that each individual turfer has accumulated since they started playing Turf. Total points are carried with the turfer between the different rounds and determines the turfers rank in the game.