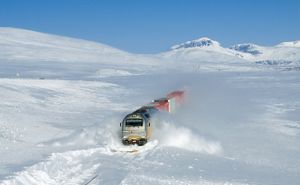 Snow is a common surface during the winter months in large parts of Sweden. It often occurs in combination with ice, especially under the cover of snow, which can lead to a risk of slipping and an increased risk of accidents. It is therefore recommended to use studded tires if there is a large amount of snow, especially after a period of thawing where melt water has frozen and become slippery. Several cycle paths are sanded in winter, which contributes to the passability being relatively good even without studded tires.