Difference between revisions of "Toplist" 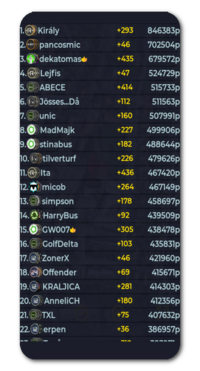 A toplist is a game element in Turf that ranks players after their current round points based on region, country or global. There is an separate series of toplists, the league game, were players play at rising in the league divided in ten divisions.

The toplists shows the players round points in descending order based on what country and region they belong to, the so called home region and home country. There is also a global toplist that ranks all players in the world in descending order.

If a players ends up as number one on either the global list or country (official Turf country) list. He will recieve his own winner zone that can be placed in an suitable place of his choosing in his home country (the country where the player took the most zones in during the round).

If you end up as top 3 on the global list you will also be mentioned in the monthly news letter Turf insider.