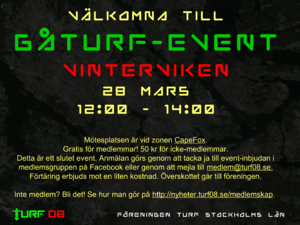 On March 28, a Turf event was held in Vinterviken in Stockholm. It was the first event arranged by the newly formed society Turf Stockholms Län. Turfing was only allowed without vehicles of any kind, i.e. on foot.

LBz won a rather decisive victory and took over the society's trophy from Yeti, who had it in his posession since the autumn of 2013. The difference between places 2 and 5 was only 71 points.