Åland (Finnish: Ahvenanmaa) is one of seven regions in Finland. The region borders with Lounais-Suomi (Southwest Finland) in the east and with both Stockholm and Uppsala in Sweden in the west. 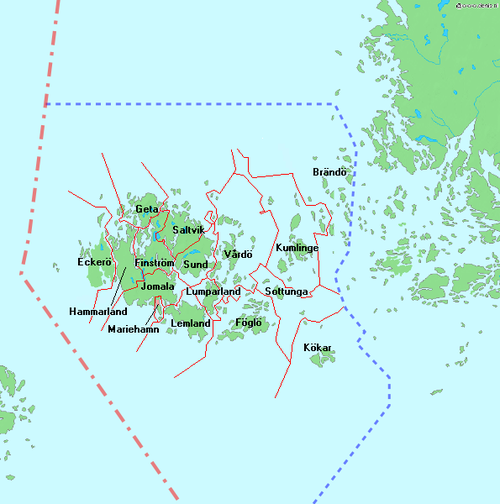 The municipalities of Åland

There are 653 turf zones in the region of Åland, 59 of which are counted as winner zones, six water zones, five monument zones, 15 holy zones, one summit zone, four bridge zones, one castle zone and nine ruin zones.

The first turf zone in the region was Maryharbour which was created on Mars 18, 2012.

For more information about turf zones, see the respective municipality.

Ranking by points taken in the region. The table is sortable (click on the headings).

Turfers in the region that placed on the global top-3 list.

Turfers who have won in the country[edit]

Turfers from the region who have won in Finland since it officially became a turf country Mars 20 2012 (in Round 21).
(The Country medal was introduced and awarded for the first time round 46).

The following turfers have won in the region of Åland since Finland officially became a turf country Mars 20 2012 (in Round 36).
(The Region medal was introduced and awarded for the first time round 46).

Region battles the region has participated in.