It's been a while since we saw a turfer from Swedens capital Stockholm at the first place, we have to look back to 2012 when Zontjuven claimed it with GBG_Dude as first runner up and Thunell at third place, recognizable turfers for us expierenced turfers but not names you often see in the toplist anymore. But thanks to ~Sysifos~, winning the gold medal with 1 165 332 points, Stockholm could reclaim the title as Turf capital of Sweden in round 85. At secound place we find stinabus at 1 061 146 points. Stinabus took more zones than ~Sysifos~ but it wasn 't enough this time. At third place we find ellge at 884 011 points, this turfers first top three placement. Impressing work everyone!

Hopefully you've read the news on turfgame.com but if not, the Turf developers are working with a huge graphic update for the application. The Turf project has finally reached a point where we can afford the professional design that the game deserves! It will take quite some time to implement, but we are happy with the initial concepts and look forward to bringing it all to you.

During July 21-22, the first 24-hour event ever took place in Umeå. No least than 45 turf enthusiasts fought a whole day and night to conquer eventzones. Everyone who completed the event got the new unforgettable event 24 medal. Turf Crew wish to thank Umeå's turfers for the arrangement. A special thanks goes to MasterJoda and lisha63 for all their work before and during the event.

Also a gentle remember about the closest upcoming event which is the TurfSea2017 event. This challenge takes place solely on water and you compete in teams of two in canoes! For more information in Swedish on this epic event check out this PDF-file (Swedish): http://media.kalmarturf.se/2017/06/Inbjudan_information.pdf

With self confidence from their recent gold medal Stockholms team Sthlm slayers have invited other regions to challange them. What I know there are 4 region teams who have accepted the challange so far. Väst götarna from Västra Götaland, Snapphanarna from Skåne, Åland region fighters from Åland and Turfing wolves from my own home region Värmland. In September the battle is here and we will probably see some higher activity then usual in these regions. As RidderVanMyyl predicted, Västmanland haven't accepted the challange yet. But it's not too late yet, so maybe we will see Västmanland as well as other regions in the battle when September comes.

Now when the most of us are back from this years vacation it's a good time to meet up with our fellow Turfers over a beer and barbeque. Värmland will have one at this Friday in fluffen9 and Vintentinas backyard, with a mini event before they light the grills. Myself participated in Västmanlads dito yesterday when ArneM invited the turfers to his allotment and Jimo arranged a mini event, thanks for letting me participate! 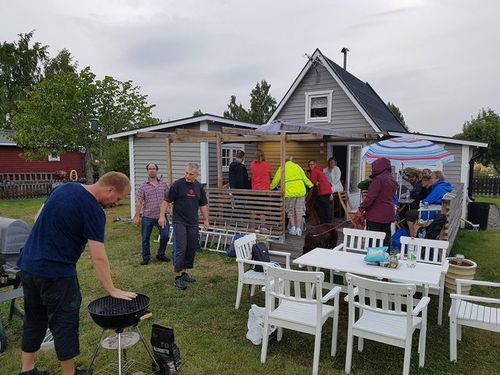 Happy turfing and don't forget to make a small detour for that extra zone!