Congratulations to the winners of round 145: MrAce from Västmanland took his second gold with a new record of 15 103 takes, Király from Skåne secured his 8th Silver by spending a lot of time in Germany and DaHunter from Stockholm celebrated 20 000 unique zones with a Bronze medal (or was it the other way around?). Well done mates!

During the September round, MaXi is once again organizing the Turf Ultimate Region Fight. 13 Regions have signed up for the Region Fight this year and the team leaders have decided on the rules and are now busy filling up their teams. If your region is part of the Region Fight, join up! It is a fun way to really get to know the fellow turfers in your region, and often from other regions too. Turfportalen is the place to keep an eye out for how the Region Fight is going, HERE.

Turf on Jamboree 22 in Kristianstad by ollals[edit]

A Scout Jamboree is a big scout camp with lots of program and opportunities for the participating scouts. Jamborees are organized in many scout countries. Jamboree 22 took place outside Kristianstad in the southern part of Sweden with 11 000+ scouts and leaders participating.

The idea was to introduce turf to younger scouts by arranging closed events and have an ordinary zone at the campsite. We organized 8 events of 60 minutes. In total we estimate to have had around 200+ turfers. In the lower age group, many chose to participate in couples or small patrols. We also had some more experienced turfers and for some of them it was their first event.

All who participated and took at least one zone got a scout+Turf badge to put on the scout shirt or their campfire blanket.

Turf was very appreciated by the scouts and their leaders. I expect there will be more events in scout groups in the future. The creation of the event was a challenge as the camp area is a former military training field without updated maps. The camp area also had some quite long and high fences.

Given that few people normally live close to the camp the capacity of the mobile networks was too low. Only one operator had put up temporary extra capacity.

Having turfed for a long time we realized that there are some challenges in introducing turf to beginners. Download of the app was easy for the scouts, explaining to them how to use it took a little more time.

Another UK zone maker has been given her black colours to wear when out turfing. You all probably know her name: féarglas. She began turfing during 2020 and found it a great ”me-time” activity. She has won the world several times and has now decided to give a little of her time back to fellow turfers in UK primarilary. She has also started enjoying travelling all over Sweden to take part of Events, so you might see her black-shirted avatar popping up at an Event near you :) And I am sure she will be up for taking a zone or two with you if you happen to find yourself in her home Turf town of Edinburgh.

There has also been a change over for the duties as Event General. MasterOfTurf has had this esteemed title for as long as I can remember. He has now decided to pass on the torch to Cissiliana. Both of them have written a few words for Turf Insider. We start with:

Some reflections from a outgoing event general[edit]

"With tense anticipation, I stand in a carefully selected starting position and wait for the Turf app to start counting down. For some reason, participating in events gets me so excited. Adrenaline rises in the body. Imagine how wonderful it would be to cycle for two hours and find event zones as quickly as possible. The popup message about 30 seconds left is visible in the app. I memorize one last time which alternative paths I have to choose depending on how the zones will be placed. A zone should appear at the trail junction I am standing at, but you never know. Yes … now the countdown starts 10, 9 ,8 ……after a few seconds all event zones appear. Wow! There is only 20 meters to the first zone.

The feeling of a good start in an Event is almost euphoric. Everything flows well for the first 10 minutes until a whole bunch of turfers approach from all directions. I zoom out the map and try to find a new area that looks good and where I will have a chance to pick zones without being blocked all the time.

What you have read up to now reflects my experiences when I start in an event.

For some reason, I always run into ”problems” that have to be solved during an event. Either I wander into a forest to get to the next zone as quickly as possible with the penalty of having to carry the bike for a bit, or a railway appears that has no transitions to the other side. The advantage of participating on ”home ground” is quite large but far from decisive. It takes pace, good strategic route choices and a bit of luck with the pph to get an advanced placement in an event. My biggest achievement in this context was when I managed to come 3rd at the Bonanza in Stockholm 2014. I had an incredible flow during the last 30 minutes and was able to collect a good number of zones and thus high pph. I still remember today how I managed to get ahead of such talented turfers as Westeras, morgam, SunYour and yeti. I still cherish the Bonanza Bronze medal. I think this event contributed to my great interest in Turf events.

Since then, I have had the task of event general in Turf Crew for nearly seven years. A very fun assignment that has given me a lot back. Not the least all contacts with turf players and event organizers over the years. Step by step, the event part of Turf has developed in terms of the number of completed events and layouts. School turf events have literally exploded in numbers thanks to Calmare1 who are doing a great job of spreading Turf within the school world. Ollals has started spreading turf in the scout world, so we can expect many scout events in the future. The number of larger open events has become more and more (apart from the pandemic period) and Bonanza has, in my eyes, developed over the past few years, both in terms of the event part and the banquet in the evening. If you haven't participated in a Bonanza before, go ahead and do it. Book in on May 20, 2023 when we'll see each other in Umeå!

Organizing a larger open event with many participants is a lot of fun, but requires quite a few people who can work as a team. In my eyes, it is therefore important that we can keep our Turf associations alive and that new ones are formed - preferably one in each region. An association has an easier time getting hold of sponsors and has an established administration with a bank account etc.

When I started as event general, I had a vision to get Turf events classified as a sport and to organize an official SM in Turf. It didn't really happen that way, but at least two Turf associations are currently affiliated with the Swedish Orienteering Association, where Turf events most closely belongs as a form of digital orienteering. I still hope we can take a few more steps towards this vision. It is very pleasing to see that the orienteering club ESOC in Edinburgh is so successful in spreading Turf and Turf events in [[Region:Scotland|Scotland. When will we see the first Bonanza outside of Sweden? I'll be the first turfer to sign up!

In conclusion, I would like to say a big thank you to Drassen and Simon for all their support over the past years. A huge thank you also to BirgittaS who has created so many nice TurfAward statuettes.

Last but not least, I would like to wish the new event general Cissiliana the best of luck in the future. I am now counting down… 10, 9, 8…. until Cissiliana takes over my role from August 1. You can reach her as usual at events@turfgame.se]

With best Turf regards to you all!

My name is Cissiliana and I am the new event manager. I have been turfing for four joyfull years. I live in Uppsala, Sweden and spend my summers in Skåne.

After many years of appriciated work, by MasterOfTurf, I am now taking over as Event Manager. So when you realize it is plenty of fun arranging events, you will contact me on events@turfgame.se].

The largest event is the yearly World Championship (The Bonanza). As the Event Manager, I will be the one who will choose between the applying cities. Well done Kalmar Turf-förening for having arranged a succesful Bonanza in Västervik this year. And good luck to Umeå on the 20th of May 2023. If you can't wait until May there are some open events coming up soon. Have a look in the app's calender.

All participants in open events will get a digital medal. More information about events can be found on [turfgame.com turfgame.com].

Another yearly tradition besides The Bonanza is the Turf Awards. I will arrange the process for the nominations, voting and ceremony. Keep in mind which turfers you would like to nominate for 2022. Nominations starts at the beginning of 2023.

Only one submission for Turf Picture of the Month during July, I guess you all are too busy turfing in the lovely summer weather :)

This months Turf Picture (Edvinstigen) is taken by allinug on her travels to secure the Finland Explorer. 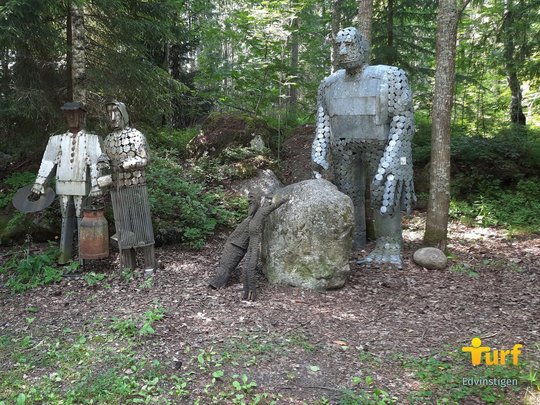 If you have a Zone picture you want featured as Turf Picture of the Month, send it to insider@turfgame.com Please include your Turf nick for recognition!