Congratulations to the winners of round 140: Király from Skåne took another Gold, Cruachan from Scotland added a Silver to his Bronze, and micke0708 from Blekinge spruced up his fifth region win with a Bronze medal.

Registration for Bonanza 2022 in Västervik is now open. There is an offer for discounted accommodation for the Bonanza weekend, read more about it here. So far 190 turfers are coming to the Bonanza. Don't miss out on the Turf event of the year :)

At the Bonanza Banquet, Turf Awards 2022 will be presented. The nominations for Best Zone Take over is still open until 15th of March. I am sure you can come up with a funny take (you did it standing on your hands) or special take (take 5000 of your home zone) and nominate it after you've finished reading Turf Insider! Nominate here.

In July, it's finally time for the ninth edition of Turf Gothenburg's open event. One Event with two classes competing at the same time. If you want to compete by foot you have to make sure to register that in advance or you will be counted to belong to the bicycle class. Read more here.

Turf Crew wants some help with updating the home page with new photos of turfers turfing. Send us your best photos of Turfers turfing! The competition is open for all turfers.

All contributions that are used to promote [Turf Teams|TurfTeams]] will get a gift card at a sports store. Send your contributions to info@turfteams.se and include your Turf-nick.

Warthog from Västra Götaland wrote to Turf Insider with a short, but very positive message:[edit]

”The medal might be the best thing you´ve ever introduced. Being out there, every day, be it 5 zones, or 50 zones, but everyday in rain or snow or whatever. It’s done wonders with my stamina and health. Would not have happened but for the turf. Well done mates!”

I can only agree, the Daily-5 is a very good reason to get out and about once per day. Keep up the good work, Warthog and thanks for your mail :)

Just a few days ago, at the very end of Round 140, those turfers that started the day the Daily-medal series was released last year, was awarded the Daily-180 medal. According to warded, 330 turfers took the medal at this first opportunity. Since then another 109 turfers have been awarded it and I am sure more will follow.

This is a story of the fight for the Daily medals from UrukHek in Minnesota:[edit]

”Part of what makes Turf so much fun for me (after the main benefit of getting me outside) is that it can be played in so many different ways. A Turfer can go for points and get on the Toplist, can turf with friends, compete against other Regions, go for different Medals, or Turf in several other ways. When I started Turfing in December 2020 there were only three Zones near me; now there are several different short routes with at least 5 Zones near me and well over 300 Zones within a relatively easy biking distance. The addition of so many Zones near me made it an easy decision to try and see how far I could go in the Daily Medal series when it was announced in September 2021.

Achieving the Daily-30, -60, and -90 Medals went pretty smoothly. With COVID-induced "work from home" I was able to maintain a schedule that meshed well with the 6 hour difference between my local ([[Region:Minnesota|Minnesota) time and GMT. About 60 days after Daily-90 I started checking Frut (ed. https://frut.zundin.se/2day.php) regularly to make sure I still had the streak going!

About 15 days before Daily-180 a thought crossed my mind that maybe I should try to take advantage of the 6 hour difference and be the first Turfer in the world to achieve the Medal (since I could do it at a relatively comfortable 6pm instead of midnight or 1am like in Sweden). Nice - another way to play Turf! I started scouting different routes and immediately found 5 Zones along a separated bike trail in Minneapolis that were only 0.8 miles apart. With a Region Crown on my head I thought I could get these 5 Zones in about 4 minutes and when I looked to see who had first achieved the Daily-90 I saw that 4 minutes could be competitive.

Unfortunately, life intervened and I would not be able to bike the 12 miles needed to get to the target (and then another 12 miles back) so I settled for 5 Zones much closer to my house. Capturing those 5 Zones would require traveling over 1.7 miles (even if I included a shortcut across a frozen lake) which would pretty much ensure I would not be the first worldwide. Oh well!

When the time came I was a little nervous and I think that must have affected my phone because I was two green bars away from taking the first Zone when my avatar jumped several hundred feet and would not come back! It finally did after about 45 seconds so I was able to continue with only a slight delay. I made good time capturing the remaining 4 Zones in just over 9 minutes. I knew I wouldn't be the first worldwide with that time. I kept refreshing the Warded Daily-180 page on my phone to see how I did but nothing was being displayed. After I got home, I realized I had miscalculated for the Daily-180 and was now the proud owner of the first Daily-179 Medal worldwide! :-)

For my next attempt, I selected 5 Zones that were also about 1.7 miles apart but along a nice flat bike path. A nice bonus of this route was that the 4th and 5th Zones are the most Taken Zones in Minnesota (MaetzoldField and Blowing). At the right time (and on the right day, this time!) I captured the first Zone (Applewood) and then furiously pedaled my fatbike along the trail as the sun went down behind me. TresTrees, Hwy7Bridge, and MaetzoldField were all captured smoothly and I grabbed the 5th Zone (Blowing) at 00:07:58 - nowhere near the times of recycling and Corellian (00:02:36!), but still among the first ten worldwide. As I rode home I managed to sneak a little färgning (ed. colouring of the zones in warded) in, too (because why not!).

I'm not sure I'll be able to achieve the Daily-365 medal because summer holidays will have me in places without Zones. I'll keep going for now though and with luck (and kind-hearted Zonemaker(s)!) maybe I'll be able to try to be first in the world in September! Whether I'm able or not, I'm glad to have such a fun, flexible, and variable game that fits in with my love of biking - thank you, Turf Crew!”

Turfing in winter can be quite a challange, but also very rewarding. It is something UrukHek again wants to tell us a little about:

”Turfing in winter can be very fun! It can also be quite cold (as my toes will attest) but let's focus on the fun instead.

My favorite aspect of winter turfing is that I can change some of my routes. In spring/summer/fall, my route between the Minnehaha and GraysBay Zones follows city streets for 1 mile. In winter the distance is a little over 1/2 mile because I can go straight between these Zones across the frozen lake surface! Similar options let me explore between Minnehaha and JidanaJetty (1 mile in winter, 2 miles other times) or between CedarPoint, PointBeach, and CedarBeach (winter < 0.5 miles, 2.5 miles other times). Winter also makes it so much easier to Take Water Zones like PointSwim (which is directly between PointBeach and CedarBeach) or Zones on islets (like BugIsland). In warmer seasons I either have to swim or haul my kayak to Take such Zones, in winter I can fatbike the whole way! 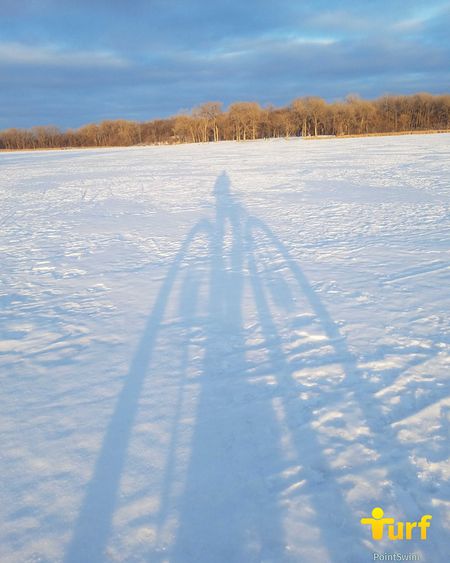 I look forward to the longer Turf rides I can take in summer, but knowing that Turfing in winter is fun and different makes being outside year-round even more enjoyable.”

Another turfer in Minnesota finds she is paying more attention to details when she is biking.

”Biking has a way of forcing me to be in the moment. I have noticed more details of my surroundings due to biking.

While playing Turf I am out in the world, and I am hyper aware. I notice new buildings being constructed, everyday closer to being finished. Art murals being painted. I notice things like an eagle eating a fish, a fox staring at me, a mouse running across my path. The sun on my face and the brisk air in my lungs.

I have been taking five zones a day since September. Unfortunately, have not paid close attention to details of the different time zones. I live in Minnesota and twice now I have had to reset my start date for the daily five due to the time difference (I forgot about daylight savings). None of my friends or family understand my frustration when I did not get the medal on the 60 or 90 days. They say, “What is the big deal? Do you win a prize or something?” They do not get that it is a sense of personal pride to have the medal. Anyways I now have the 90 and fingers crossed I will have the 360 next year. Better late then never.”

...the Gold medal has been awarded 140 times to 75 different turfers.

...the Silver medal has been awarded 140 times to 95 different turfers.

...the Bronze medal has only been awarded 139 times since Simpan, one of the creators of Turf, did not want to accept it for the very first round of Turf.

First out with Picture of the Month is mpmoke from Uppsala showing us what he found in a zone during Speedweekend 2022 25-26th of February. 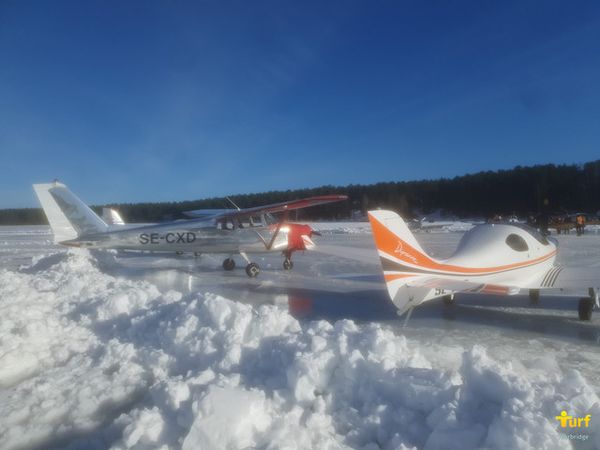 If you have a Zone picture you want featured as Turf Picture of the Month, send it to insider@turfgame.com