Congratulations to the winners of round 142: féarglas from Scotland biked home her fifth Gold, B4RK from Värmland turfed home his second Silver in one snowstorm among other weather conditions and Drylaw13 from Scotland is likely to have celebrated his second Bronze medal with some liquid renewal in the home pub.

Soon it is time for the World Cup in Turf: It is Bonanza time! This year we all meet in Västervik, on the east coast of Sweden in-between Stockholm and Kalmar. There will be a foot event and a bike event, lots of turfers, lots of fun and, hopefully, lots of sun. All this will take place on Saturday the 21st of May. In the evening there will be a Bonanza banquet where Turf Awards 2022 will be revealed. Come and join us! Read more about it here.

Two Turf events for the price of one in Luleå, Norrbotten the second weekend of June. First during the day there will be a triathlon event where the participants will compete in three different categories; points, takes and unique zones. After the triathlon event there will be a Turf meeting at O´learys and then the Midnight event will start at 11.30 pm on the 11th of June and finish at 1.30 am on the 12th of June. To read more and sign up for these events go HERE.

And don't forget about Göteborg Open on the 2nd of July :) Information in Swedish HERE.

After the Bonanza, vacation times are upon us. With the Daily-5 medal series entering the long 100 days haul towards the golden Daily-365 medal, you need to plan your vacation accordingly. The number of requests for zones in various turfers vacation spots have risen and although some might have been awarded by kind zone makers up until now, the decision from today is to stand firm and not hand out zones to turfers unfortunate to pick a vacation spot in zone free spots. Turf Crew's focus is more zones in official Turf Countries, not turfers favorite vacation spots in non-official Turf countries.

In order to make those zones (and remember that zone making is a time consuming manual work), Turf Crew is expanding and new zone makers have been (and some still are) in training. Three have been promoted from apprentice to zone maker in April and they are: JoasK, kjtindall and Fozzie. They have written a few words about themselves for Turf Insider.

”Born in 1965. Father of 2 children and an outdoor man, with his Turf passion he must have been a hunter-gatherer in an earlier life, knows no homesickness, but has permanent wanderlust. His favorite means of transport is his bike. His declared goal as a zone maker is that the density of zones in Germany grows significantly and he would like to somehow inspire more players in Germany.”

"My nick is Fozzie, and in real life I'm retired, having previously spent a career as an engineer in the IT industry. I'm married to Loobyloo and we live in Bracknell, just to the west of London. I very much enjoy outdoor activities and particularly enjoy long distance multi-day walks - one of my retirement goals being to complete all the National Trials in England and Wales. (4 down, 15 to go.) I was introduced to Turf by a former colleague, with whom I stay in touch via Strava. Turf immediately appealed to me, rewarding activities I already enjoyed and appealing to my competitive nature. Now I’m on the Turf Crew, I’m very much looking forward to helping improve the zone distribution in the UK and hopefully seeing the app become more popular here. I would love to see the turfing community grow locally."

”I am Kenny (kjtindall)! I got in to Turf towards the end of 2020 during COVID lockdown as a way to get out and exercise. And quickly became addicted of course!

I am stepping back a bit now from actual turfing and will drop out of Elite next month. And I felt it was time to give back and help make some zones so other people can get as much out of turfing as I do. Looking forward to giving people more reasons to go places and see new sights that they otherwise would not :)”

So there you have a short introduction to our three new zone makers. Their main areas for making zones will be Great Britain and Germany.

Two more apprentices are in the training program, hopefully they will want to introduce themselves in next Turf Insider :)

Entertainer and Florence from Sweden bought a Day-card for the train (560 SEK) and did Netherland Explorer in one day, mainly by taking Train station zones I guess. I am sure they will share their route if you ask them.

Marcus_P did something similar, but he spent two days on trains to take the regions he was missing in order to get the Germany Explorer as 4th German turfer. He was awarded his Germany Explorer medal in Cologne where he met up with JoasK for a bit of turfing together. 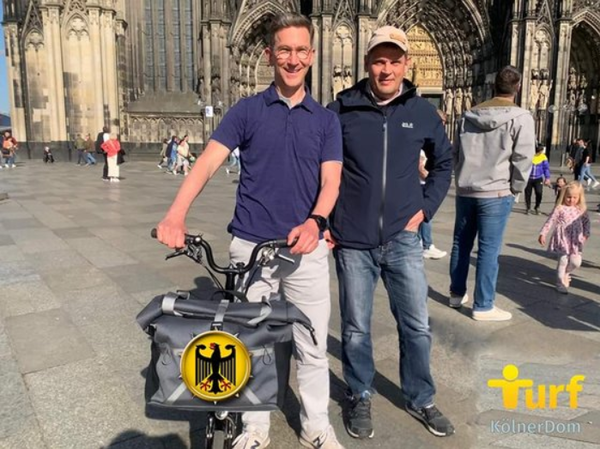 Finally, four Swedish turfers took the train from Stockholm to Denmark and zipped around this small country for a few days. Here is their story:

”4 small turfers got on the train in Stockholm and went on a conquest trip to Denmark. Via Helsingborg we snuck across the strait to Helsingör. Surprisingly, we discovered that even though the sun was shining, the south was no warmer than our beautiful capital in the north. The first night we spent in a hotel in Copenhagen. After a very different, and a bit foamy, dining experience at a very stripped down restaurant, we slept well in a cheap but good hotel.

The next day, our great conquest journey through Denmark began. Region after region was ticked off without any problems thanks to an incredibly practical Interrail ticket that makes travel smooth. Go where you want and get on whichever train you want. And considering that our initial planning often changed once we were on the road, it suited us perfectly. In Aarhus we took lunch / dinner stops and found the fantastic Streetfood and some very good Greek food slipped down into our hungry stomachs. Now we only had one region left for the beautiful medal and after a little over an hour by train we arrived in Ålborg. Our mission was complete. Denmark is ours and that without them even suspecting anything. Of course it was celebrated with both Irish coffee and drinks and very practical; our hotel was within crawling distance of the bar.

It was our third national medal, Sweden and Finland we turfed home last autumn. Not too bad for two blind people, one visually impaired and one with rickety knees.

For us, the great pleasure of turfing like this, is ending up in places where we would never have ended up otherwise. That we also sometimes meet happy, nice and helpful people is a pure bonus. We have already started planning for the next Explorer medal… the question is of course… will it be Norway… the Netherlands… Germany… or maybe South Korea… the one who lives… and turf… will see. / CatEva, MyZon, Alfonsa and Lledrot”

So which Explorer medal is next on your list? Personally I am taking an ”Explorer free Turf year”, but next year it looks like Norway and maybe continuing on the Great Britain Explorer where only three regions have been visited to date. If you are aiming for the UK Explorer this year and have not yet been to Greater London area and would like to bike, you might want to try out the city's "Boris bikes". This story from Steventon_gang about how to use the ”Boris bikes” to get around the Greater London, might be inspiring:

”Travelling down on the train to London Euston twice in the April round, Boris bike turfing around London has been great fun! With the extremely wide handlebars, I haven't been able to use a couple of mobile phone holders as I normally would on my home turf around Stoke-on-Trent and Crewe, which has made turfing more of a mental challenge and great practise of map memory skills when orienteering, and ruled out keeping my phone charged up on the go.....although I've been grateful of a bit of a break both days when being on the go for 7 hours or more.

The 3 speed Nexus gears mean that it doesn't feel as though you're doing much more than around 12-13mph in top gear, but a lot of places around central London where it's very busy with tourists and traffic mean it's not too much of a hindrance. My ride on the first day of the April round racked up a £28 charge (£2 for every half hour) for hire of the bike.

Before the first Sunday in the month, I'd seen that there were still plenty of neutral zones over in the Fulham area, so deliberately made my way over to there from Euston, although the main aim was to rack up as many uniques as I could. Starting the day on around 2,360 uniques, I got my 2,500 unique medal with the zone on Blackfriars Bridge, which was a great zone to bring up the milestone towards the end of the day.

Getting the Decaregion medal at Watford Junction station on my way down (East of England region) was also a good way to start the day. Of the 162 zones done, I kept 31 of those zones until my second visit on the last Friday of the round.

The second time I was meeting a friend in Bayswater for lunch, again with the aim of picking up uniques, so largely steered clear of the zones I'd done on my first visit. It was great to see places I'd not seen before despite studying and working in Central London for around 7 years - I'd never been to Primrose Hill before, parts of Notting Hill and Fulham, and bits of Shadwell and Limehouse, and managed 186 zones, although I had a bit more time with starting earlier, and a bit more daylight to make use of at the end of the day, although the lights on a Boris bike are adequate! Am looking forward to future visits to London, there's many routes still available to pick up lots of uniques in days out on getting down to Euston early in the morning.”

...that morgam is the only turfer with one each of the Bonanza medals; one Bronze, one Silver and one Gold.

...two turfers have two Bonanza Gold each; rabbit_rail and bUs.

...16 Bonanza Gold medals have been awarded 14 different turfers. Turf Picture of the Month

Out of the submissions for this issues Turf Picture of the Month, the choice fell on JomalaPond sent in by ojarnstr. A big thanks to everyone for sending in their Turf Pictures :) 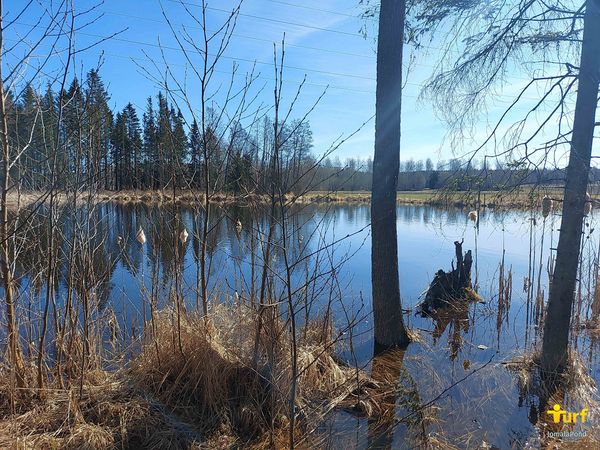