October has come to an end and so has round 76, another round with a winner who gathered over one million points! At third place we find Rulf with 847 790 points (a first time bronze medalist), at second place with 901 203 points Király (a first time silver medalist). and finally, at first place we find the winner of this round, with 1 274 315 points , Jomii who already has a silver medal! Congratulations!

While Király took over 4 386 zones, Jomii actually took over 7 403 zones! Taking over that many zones isn't unique but worth mentioning. As an example, 7 500 takeovers during a five week round means taking over nearly nine zones an hour, every hour, day and night during the entire round. If you're not a zombie, maybe 21 zones per hour, 10 hours a day seems more reasonable, but heck, that is still a whole lot anyway!

Medals and attributes Two new medals are visible on the homepage www.turfgame.com, you'll soon be able to hunt for them in the application. I suggest you go check them out!

A couple of new attributes have been made official! For those of you unaware of these peculiar attribute thingies, it's what some zones can have if they are near or in a certain area. At the moment only one attribute can be given to a zone and there is a hierarchy. Below, you can gaze at their beauty, they are pretty self explanatory. 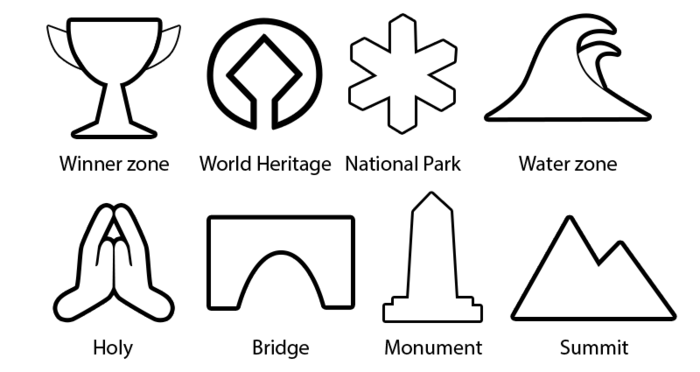 An upcoming event is the Lusseturf in Västerås, it's time to have some fun in the snow! It will take place on December 11th between 10-13 and you can compete for free but if you want goodies and be eligable to snatch a prize you will want to pay 40 kr to the organizers right away. If you decide to do that on location, you will have to pay 60 kr instead. More information about the event in Swedish right here!

At the moment we are looking for some danish turfers that can fill the proud role of zonemaker. Your local expertise is needed, so why not drop an e-mail to us at zones@turfgame.com and maybe you can be our next zonemaker. As usual you are required to have knowledge of the game and have been active for some time to qualify, and you will also undergo extensive testing and a rigorous training program before you are a fully fledged zonemaker. Okay, I admit, I made it sound a lot worse than it is, but we do have a couple of tests that you have to take just so you get the hang of zonebuilding.

At the moment of writing this, large parts of Sweden have been hit by large amounts of snow! This is quite early but not completely uncommon and I for one welcome it. I've been really keen on getting some snow here and get to ride my bike and skid around! I urge you guys to embrace this snow and go out and have some fun, perhaps with one of those lights that were talked about in the last newsletter!

See you in December!