As we said last time: worth noticing is that the boundaries for what you would think possible once again were breached! Királys take record from previous round was beaten the next round. By the man who has given the staminatrix medal a face, scoring seven of them this round if I'm correct. Bont from Umeå became the first one to pass 10 000 takes in one round, reaching no less then 10 295 to be exact. With these takes he reached 1 546 263 points and claimed his first gold medal. Very impressive! At second place we find GW007 from Kalmar adding another medal to his nice collection which now contains 3 gold medals and 2 silver medals. At third place we find Király whom with this round adds the only missin g of the nobel medals to his collection, now containing 2 gold, 3 silver and 1 bronze medals. Great job everyone!

The records split into 4 and 5 week rounds:

This winter Lusseturfen is celebrating their 5 year anniversary. This is a Turf event competin g on foot in the Västerås forest, you can find more information and application on their webpage uturf.com (Swedish).

As you all know, the Bonanza 2018 will also be arranged in Västerås so now is a good time to prepare and investigate the terrain. Speaking of the Bonanza, the information and application form for arranging the Bonanza 2019 has just been sent out to all the known Turf association. So gather your team and claim the next big Turfing feast to your town!

There are a few different way of adding zone suggestions. The easiest way is by the application but there are a lot of them so many of them are never approved. The zonemaker often ask for some more information and photos of the suggestion in the forums from the turfers. I have written about this in my blog if you wa nt to now more.

And then, lets ceck who has gotten most of their suggestions approved: 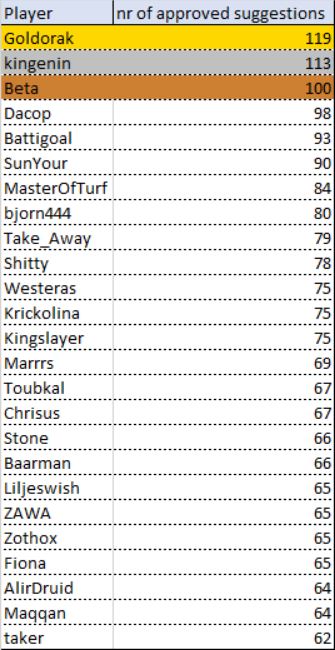 Nice to see my own name there, a bit down but still :) Think I need to promote my suggestions more in the future to increase my number.