Congratulations to the winners of round 123: M0112 from Åland turfed home his third Gold, recycling from Östergötland added another Silver to his collection and Gallant from Kalmar turfed home the Bronze.
Well done mates!

Very few open Turf events are being organized due to Covid-19. However, plenty of school events still takes place all over Sweden and other Turf countries. If you want information about how to use Turf as part of school gymnastics, contact skolevent@turfgame.com and you will be sent information about how to proceed. Last time I checked in with our school event coordinator over 500 gymnastics teachers had account for 'school Turf events'.

A couple of open events have taken place during the last round, like KalmarDuo and SthlmBike20.

"All events have not been canceled this year! On September 12, Kalmar Turfförening organized an open event for 27 participants from seven various Turf regions in Sweden. The set-up of the event this time was "Duo Turf" with 60 minutes of jogging, 30 minutes break followed by 90 minutes turfing on the bike. We used two different Turf areas in Kalmar city. A summary (in Swedish) with pictures from the event can be found here.
Sincerely,
MasterOfTurf"

Several Turf clubs around Sweden hold private mini-events for their members and if you are interested in setting up your own private event, send an e-mail to events@turfgame.com and you will get help in how to set it up :) I have done it myself several times and it is lots of fun.

During round 123, 11 Swedish regions took part in a multi-region battle. Teams from all over Sweden competed in three categories; points, takes and round unique zones. This was the largest multi-region battle in Turf's history to date. After the first week, Team Uppsala and Team Östergötland were tied for first place. It looked like Team Östergötland really wanted a rematch after their loss in March when Uppsala and Östergötland battled it out and Uppsala won. Team Uppsala was very surprised to be tied for first place after the first week, since their main goal was to have fun and go for round unique zones. Many of the team members were aiming for the Diversiest medal, 1000 round unique zones. In March, I was part of Team Uppsala and spent a lot of time biking. This time I decided to stay on the sideline of the multi-region battle since I had too much else going on. It was exciting, but also frustrating to be on the outside of the tough battle that ensured between Uppsala and Östergötland over four weeks.

Both Team Uppsala and Team Östergötland consisted of a solid core from the previous region battle in March, with some new additions. This meant that each team knew it would be a tough four weeks from day one. I don't know about the tactics of Östergötland, but Team Uppsala's main tactic was to have fun :) Their main goal was to go for round unique zones, and boy did they! 19 turfers in team Uppsala took 1000+ round unique zones; 17 for the first time. Two turfers did a tiny 'nerd sync', with one take they were awarded two medals; Ghost Minute and Diversiest. Well done pandora and BadLoser!

As part of Team Uppsala's goal to have fun team members invited visiting turfers from other regions, including turfers from other teams in the region battle, to join them for takes and assists. Both when meeting up in other cities, like one Saturday in Gävle when two Uppsala turfers met up with turfers from Dalarna, and when turfers from Västmanland, Stockholm or Västerbotten visited region Uppsala.

Turfers from both Stockholm and Västerbotten took part in Uppsala's 'city lap' during week four. The 'city lap' consists of roughly 30 zones in central Uppsala and the turfers take the zones together in two groups, getting to the blocked zone at the very moment the zone can be taken again. This tactic frees up the rest of the city to turfers not in the team. Non-team turfers could also be seen taking part in the city lap, and during the region battle many, many Assist-medals were awarded to the Uppsala turfers.

Team Uppsala had team members from the three biggest cities in the region of Uppsala; Uppsala, Enköping and Bålsta. As part of the hunt for round unique zones, turfers visited each other and were guided by a local turfer in each city. Lunch and fika were also part of the visits, and several times turfers from Enköping came over to Uppsala to take part in the city laps during week three and four. On one occasion Dominion biked from Enköping to Uppsala, took a few laps and then biked home again. That is dedication (and a little bit crazy)! The secret to the city lap, is that the speed is never faster than the slowest turfer. Everyone should be able to take part; the more the merrier :) During the last weekend of the region battle, it was at times 6-7 turfers per group in the city lap. Since every team member knew the zones in the lap, it was easy to join, bike a lap or more, and then leave.

Uppsala turfers were not the only ones during the region battle that showed hospitality to turfers from other regions. Stockholm turfer Oberoff guided Uppsala turfer Rymprak during the last weekend in parts of Stockholm and this was highly appreciated since Uppsala had to win round unique zones in order to have a chance of winning the whole thing. 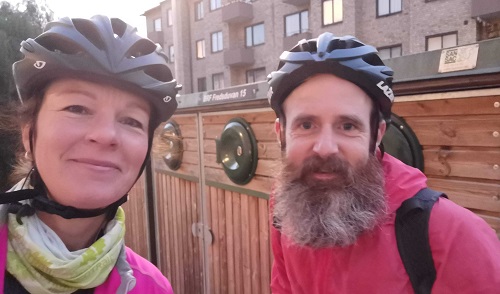 Team Uppsala knew from the beginning that the points category was a lost cause, Östergötland gets so much more points for each zone, that it was never a goal for Uppsala to win this category. Round unique zones is a fun category and Team Uppsala had turfers out almost every day working on this category. Often turfers visited each other's cities and were guided by a local turfer to as many zones as possible. During the last week two old ladies from Uppsala visited one old lady in Enköping and spent the whole day turfing together with breaks for lunch and fika :) 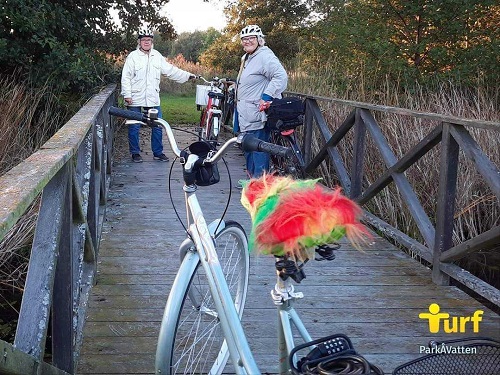 After three weeks, Uppsala was two points behind Östergötland in total points. Monday night tactic talk ended with a firm resolution to win Takes week 4 and also continue with Round unique zones in order to win this category week 4 and the total. Execution of this plan included more excursions for round unique zones, and a lot more city laps. During both Friday and Saturday the last week, a lap was also set up in a small neighbouring town to Uppsala, partly to avoid the shopping crowds of Saturday, but mainly because the resident turfer in Storvreta had booked the neighbourhood community hall to use as a hub. The last 48 hours of the region battle, Uppsala turfers biked home five Staminatrix medals. It was a tight battle over Takes with Östergötland until midnight between Saturday and Sunday when Team Östergötland gave up and Team Uppsala just kept biking.

In a multi-region battle it is harder to keep track of the overall points and how to win than when two regions battle each other. Team Uppsala never had a chance to win the points, but managed to their own surprise to claim second place in this category. Points were awarded both for the placement for each week and for the total placement. 12 points for first place, 10 for second, 8 for third and so on. This made for interesting calculations. The battle was going to be decided by which team won Takes week 4. Both teams were going to get 32 points for their placements total score for each category. A tie in points between the two teams, would give the win to Uppsala since they had more team members. However, Team Västmanland helped Uppsala win by two points, since they climbed to second place for round unique zones week 4, surpassing Östergötland in the last 24 hours of the battle, thus making sure Uppsala would win by two points. 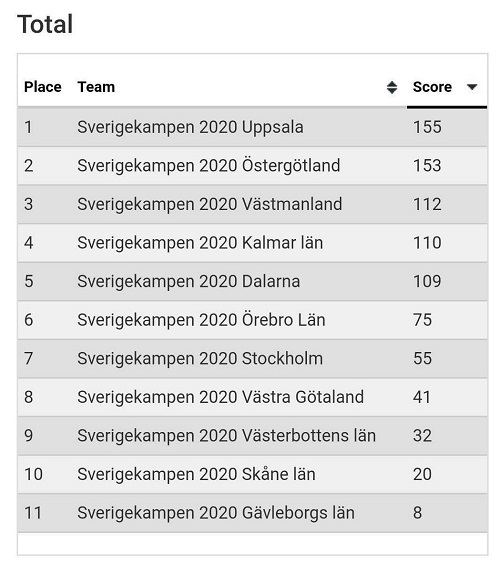 I hope everyone who took part in the battle had fun and will continue to have fun in future battles, events and everyday turf sessions. On social media I have seen stories from many regions about turfers getting together and visiting other cities, nightly turf sessions and other fun stuff. Kalmar for example made a new 'buff' for every member of the team. Turf is so much more than just taking those zones every day. Team Uppsala did not expect to win this multi-region battle, but they did and had a whole lot of fun doing it. They also did a lot of biking and were at time very close to giving up, but the team spirit of having fun held to the very last take in front of Uppsala train station just before 12 on Sunday the 4th of October.

To take two or more medals with just one take. To my knowledge the highest 'nerd sync' is to take four medals with one zone. This can be done by combining Take-X, Unique-Y, maybe a Ninja and Aquaman. The Greed-medals are hard to use in a nerd sync, but it can be done. Certain medals can not be 'synced' like Ghost Minute and Aquaman. Another way to get a nerd sync is to rank up at the same time as getting one or more medals. Other kinds of nerd syncs have also been done; like taking unique turfer 5000 with unique zone 5000. If you haven't thought about nerd syncs yet, it's time to go and plan one :)