Congratulations to the winners of round 122: pancosmic from Stockholm finally biked home his first Gold, chewing on apples and plums giving him that extra energy needed, Gammelturfen from Dalarna added a Silver to his Bronze and grimric from Skåne turfed home the Bronze.
Well done mates!

All major events are canceled due to the ongoing pandemic, but around the countries, some smaller, local events are being held.

Turf Stockholm wants to invite everyone to their Stockholm Bike Open in Barkarby on the 3rd of October. The event will take place in the nature reserve between Järfälla and Sollentuna in Stockholm. More information will be posted on Facebook closer to the event.

During round 123, 11 Swedish regions will battle it out in three categories; points, takes and round unique zones. The different teams and their progress can be checked out at Turfportalen. Points will be awarded both every week and the total score at the end of September's four weeks. The Region battle will end at 11.55 on Sunday the 4th of October.

Those of you who at times look further away than the next zone on the Turf map, might have spotted a high activity in Scotland, the northern region of Turf country United Kingdom. Edinburgh has become the latest city/region to see a rise in local turfers. Turf Insider got an e-mail from one of the turfers behind the rise of Turf in Scotland:

”Turf is exploding in Scotland!!!

Not literally, but it has become THE new hot craze for us in Edinburgh. Like other Turfers, we are now addicted too! We can’t believe we didn’t discover this earlier and we are making up for lost time ...

The activity has escalated massively in the past six weeks or so for us, so I think there were four people in the whole of Scotland turfing until recently, and now we’re getting up closer to 100 people, fighting it out on the streets of Edinburgh to take zones!

The origins of this are thanks to CSL, who is a member of our local club, Edinburgh Southern Orienteering Club (ESOC). CSL has been an active Turfer for a number of years, but only recently did the rest of us catch onto this and start enjoying it right across the club! We’ve really been going for it to spread the word, through our club magazine, in our WhatsApp group, and in our regular emails to members, and via Facebook and twitter, so it has really taken off. At the start of the August round, we had a competition within our club for the best points total by midnight, following the (for us) 11am start. You can read more about it here. And we’re about to do the same again, with many more participants ready to go to war! 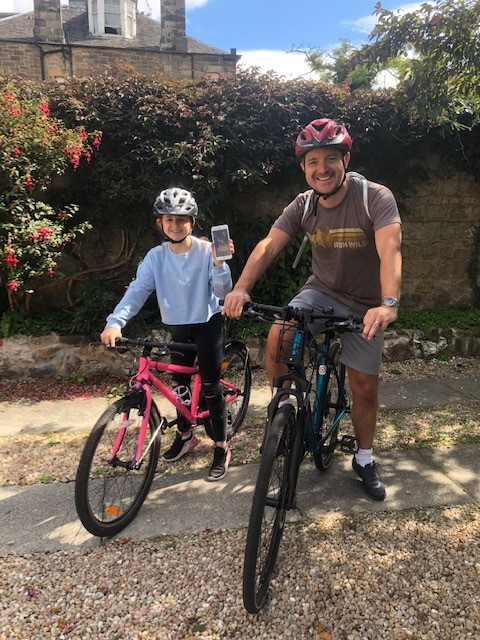 ESOCWalter and his daughter ESOCZoe heading off at the start of their Turf club challenge last roundbreak. They did 10k and took a load of zones!

Particularly during the Covid-19 pandemic and in the absence of normal orienteering events, we have found Turf a great source of exercise, and importantly also a source of connection, giving us all a points-driven reason to exercise and get out into the city. It’s prompted loads of interactions between us, to the point where we’ve had to create a separate ESOC Turfers WhatsApp group, alongside our club-wide group, because of the volume of banter! We are slowly converting those who haven’t tried it, and I basically tell anyone I meet about it now!

One of the things I love about it is that people can do it whenever they like, as much as they like, however they like, so it’s so flexible. My own family were getting worried about me getting addicted, and late one evening I had to escape out of the window to take some zones because they locked the doors and hid the keys! I like the medals, and am desperate one day to get my Eager Ferret! I also have my eye on the Order of Aquamen, as we have a new zone in the sea off the beach at Edinburgh.

It is not hard to get addicted in Edinburgh, which is a totally beautiful and compact city, with loads of undiscovered zones just around the corner. The photos show some of these, and having lived in Edinburgh virtually all my life, Turf is definitely taking me to new places, which is fantastic. Our zone-setter Kingslayer has been doing an AMAZING job for us creating new zones in and around the city, and they don’t stay yellow for long! We’ve quickly turned the whole area red and we are now getting other local clubs involved in nearby places like the Scottish Borders.

Zone LussView next to Loch Lomond

One of our members in particular you may have seen climbing the leaderboard is féarglas! She’s completely unstoppable and we are so proud of her! In the morning, it is not unusual for the rest of us to wake up to “fearglas has taken 30 zones from you!” or a similar message. She is doing phenomenally well and has so much energy for it, which I think does keep the rest of us going too!

So basically, we LOVE Turf in Edinburgh! We’re so happy to be a part of the Turf community, and we are so incredibly grateful for all the support from Kingslayer and others in the Turf Crew, for helping us to get the most out of it. And we’d love to see other Turfers over here on your holidays taking our zones too! Come across any time!

Two years ago I visited Edinburgh and took most of the winner zones in the City. I think there will be a few more next time I go there :) Maybe we will even soon see a World winner in féarglas from Scotland? Keep on turfing!

Autumn is here and it is getting darker earlier in the evenings, so don't forget to put on the reflex clothing and front and rear lights on your bike if you are biking. Be seen, be safe!