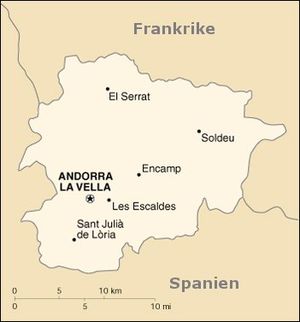 Andorra is the sixth-smallest nation in Europe, having an area of 468 square kilometres (181 sq mi) and a population of approximately 77,006. The Andorran people are a Romance ethnic group of originally Catalan descent. Andorra is the 16th-smallest country in the world by land and the 11th-smallest by population. Its capital, Andorra la Vella, is the highest capital city in Europe, at an elevation of 1,023 metres (3,356 feet) above sea level. The official language is Catalan, but Spanish, Portuguese, and French are also commonly spoken.

There are six turfzones in the country all belonging to the same and only region "Andorra".