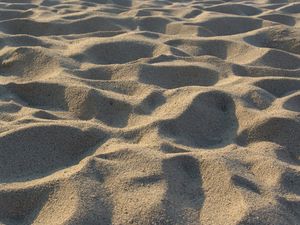 Sand is a granular material composed of finely divided rock and mineral particles. It is defined by size, being finer than gravel and coarser than silt. Sand can also refer to a textural class of soil or soil type; i.e., a soil containing more than 85 percent sand-sized particles by mass.

The composition of sand varies, depending on the local rock sources and conditions, but the most common constituent of sand in inland continental settings and non-tropical coastal settings is silica (silicon dioxide, or SiO2), usually in the form of quartz. The second most common type of sand is calcium carbonate, for example, aragonite, which has mostly been created, over the past half billion years, by various forms of life, like coral and shellfish. For example, it is the primary form of sand apparent in areas where reefs have dominated the ecosystem for millions of years like the Caribbean.

Sand is a non-renewable resource over human timescales, and sand suitable for making concrete is in high demand. Desert sand, although plentiful, is not suitable for concrete. 50 billion tons of beach sand and fossil sand is used each year for construction. 1

Turfzones with sand surface i sand is usually taken most easily by walking as the surface is usually difficult to traverse with bicycle and it usually forbidden for cars.