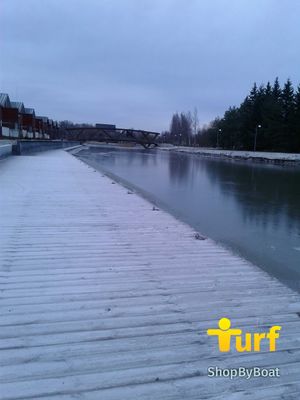 A Jetty in winter clothes in Pargas, Lounais-Suomi.

A jetty is a structure that projects from land out into water. It may also refer more specifically to a walkway accessing the centre of an enclosed waterbody. The term derives from the French word jetée, "thrown", signifying something thrown out.[1]

The Jetty is an open construction, unlike a pier, which is massive. A jetty that rests on pontoons, floating blocks or other floating objects (for example air-filled barrels or cans) is called a floating jetty.