Difference between revisions of "Austria" 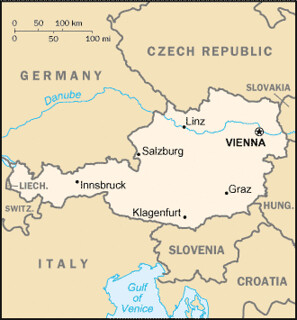 Austria (German: Österreich), officially the Republic of Austria (German: Republik Österreich), is a landlocked East Alpine country in the southern part of Central Europe. It is composed of nine federated states (Bundesländer), one of which is Vienna, Austria's capital and its largest city. It is bordered by Germany to the northwest, the Czech Republic to the north, Slovakia to the northeast, Hungary to the east, Slovenia and Italy to the south, and Switzerland and Liechtenstein to the west. Austria occupies an area of 83,879 km2 (32,386 sq mi) and has a population of nearly 9 million people. While German is the country's official language, many Austrians communicate informally in a variety of Bavarian dialects.

There are 43 turfzones in the country all belonging to the same and only region, Austria. Eight of these are counted world heritage sites, one as a water zone, five as trainstation zones, seven as monument zones, three as holy zones, two as bridge zones and one as a castle.