Vatican City, officially the Vatican City State (Italian: Stato della Città del Vaticano; Latin: Status Civitatis Vaticanae), is the Holy See's independent city-state enclaved within Rome, Italy. Vatican City became independent from Italy with the Lateran Treaty (1929), and it is a distinct territory under "full ownership, exclusive dominion, and sovereign authority and jurisdiction" of the Holy See, itself a sovereign entity of international law, which maintains the city state's temporal, diplomatic, and spiritual independence. With an area of 49 hectares (121 acres) and a population of about 805, it is the smallest sovereign state in the world by both area and population. 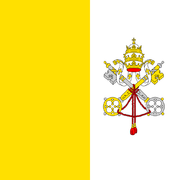 There are two turfzones in the country all belonging to the same and only region, Vatican City. One of these counts as a world heritage site while the other counts as a holy zone.