October has come to an end and we have no less than three newcomers standing on the podium this month! The winner of the 52nd round of Turf is recycling from Linköping, yet another crazy turfer to reach over one million points by the end of a four week round! In second place we find MarresmacK who gathered a cool 722 000 points and on third podium place with 3066 takes stands a proud dekatomas with nearly 615 000 points!

Someone who didn't quite reach the podium is Snusmumriken who landed on fourth place but who is the first one to reach the daunting rank of 56 also known as Turf Angel. She has achieved this by reaching a total score of over 11000000 points! She on the other hand made nearly 4000 takeovers this round which is a lot more than than dekatomas. Read more about the different ranks on turfgame and on the wiki.

You may have noticed that Denmark has received a large number of new zones the past 4-5 months. This was part of project ”Densifying Denmark” which has been completed now. The goal was to ensure that the Danish turfers, in larger and smaller towns, have the same access to zones as turfers in the neighboring turf countries. New zones have also been created in places that are spectacular or otherwise of interest for visiting tourists, like RujBergFyr in Jutland which is drowning in the sandbanks, the beautiful Barokhaven in Hillerød and the cozy old entertainment park Bakken north of Copenhagen (no entrance fee!). If we missed any outstanding places – let us know! We love to see more danish turfers on the map, so if you live in Denmark and have bright ideas on how to attract more turfers, please share you thoughts, either through the forum or send us an e-mail to contact@turfgame.com, there's a dedicated danish section right here! If you happen to find a bad zone, don't hesitate to report it on the issues site. Also, remember that the 250/0 zones will receive points per hour (pph) when the activity of that specific zone increases. These are special zones where the pph can change in the same round unlike normal zones, so don't hesitate to try different routes!

As I mentioned a few months back, the Turf Crew is alpha testing a new Android version and the developers are constantly developing and squashing new bugs as we discover them. Here's a sneak preview! 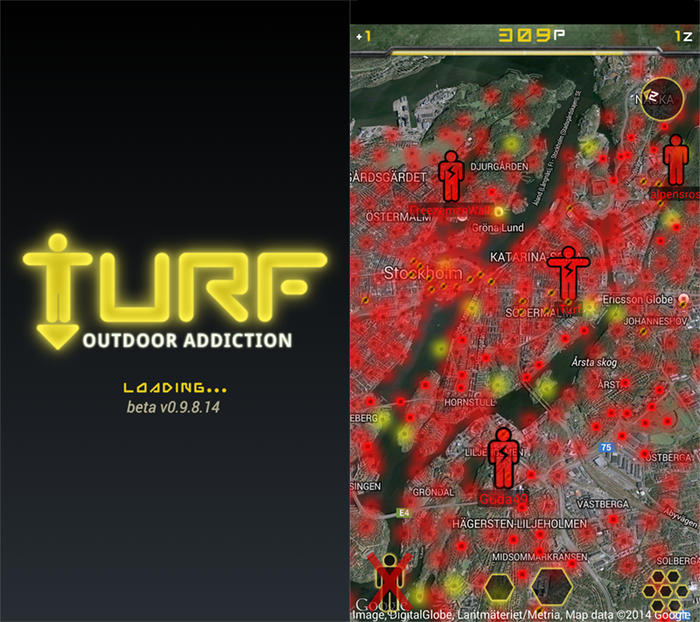 As you can see, it's not 0.7.1 we're working on at the moment. The map on the image is rotated and you can see the compass showing north. The map is also tilted slightly which may be hard to see. An added feature is that the arms are stretched out when a turfer is taking a zone. The new version also has a more user friendly "slide to next chat" and no longer requires that intricacy as the current version does. The new version also uses cached maps which will decrease the amount of data used by Turf! Hopefully by the end of this year, the beta will be available for supporters, which reminds me...

For those of you who jumped to the opportunity of throwing some cash into the Turf servers about a year ago, remember that your supporter membership is running out. To still have access to these features and the cool beta release coming up, don't forget to renew your membership here! Without this extra cash it is really difficult to run smooth servers since even if this is a free game, the servers unfortunately are not.

It's getting chilly and even the high tempo bike rides and jogs are beginning to require some additional attire. Some find the couch more comfortable than the bike saddle but my tip for you guys is to (if you're not already doing it) buy a nice pair of in ear headphones and listen to a couple of good tracks or why not an audiobook. It really gets your mind of the rugged autumn weather. Here's an ongoing discussion about music people listen to, in Swedish though, but don't hesitate to make a new thread in a different language!