This month I'm a little extra proud to present the winners since one of them is from the region I live in, namely Uppsala! Two of the top three players have also crossed the one million mark this round, something that is becoming increasingly common. When it comes to takeovers it's a mixed bag, which is normal in Turf. At third place we find URacing from the region of Skåne who took 4 924 zones and gathered 803 370 points! TXL snatched the second place by taking 3 815 zones in Västmanland and gathered 1 017 706 points! Finally, at first place we have SJ from Uppsala who took over 5 163 zones and gathered 1 038 965 points! A round of applause for the winners of this round!

I can inform you of three upcoming events, two this month and the big one in May! On February 14th you can celebrate with your loved one by attending this event that popped up in my Turf Calendar, namely an open event in Farsta between 11-13 o'clock. In order for the event to have enough zones, they would like you to drop a mail to events@turf08.se. Here's all the info (in Swedish): http://nyheter.turf08.se/

A last reminder of the event in Umeå, the Winter classic, which will take place on February 20th. The event is split up into three parts, one for minors, one for the rest, and one for those to choose to compete on foot. If you are a minor you have to get permission form your parents to be able to compete, and also, bring them along since they are responsible for you! Minors get away with competing for free, but if you are older you may want to bring some cash with you, the tuition is 20 kr. For more info (in Swedish), check out https://forum.turfgame.com/viewtopic.php?f=131&t=5049

And now for, drum-roll please, the Bonanza! Yes folks, write it down in your calendar, because on May 21st, the annual Bonanza will take place in Kalmar! And already on February 15th you will be able to sign up for this major event. For you people who are new to Turf, you might ask what a Bonanza is? Well, it's like the Olympics of Turf, it's the big yearly event with lots of competitors, and lots of fun! If you haven't been on one earlier, I recommend you go, you get a medal just for participating but for those nice prizes you will have to do a bit more than just be there! There will be two heats, one for walking and one for cycling, in the cycling event you can also use other forms of non-motorized means of transportation such as fly-jumpers. For more info check out https://www.turfgame.com/ on February 15th!

Turf is known for its slow progression when it comes to development. Well, I can inform you that there is something big happening at the moment. Turf Crew is testing a new top list which will function like the third party series lists that already exist. This does not mean that they are obsolete, they work a bit different so one might prefer one version from another. As I mentioned, it's only circulating among the Turf Crew since it is full of bugs, but will be available for Supporters perhaps as soon as the next round! Yet another reason to support Turf, and it sure is needed. Here's a link to support Turf: https://turfgame.com/supporter

Below, you can see an image of what it looks like at the moment (yes, I know I suck) 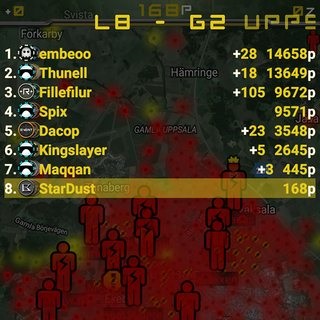 See you in March!