Turf is a location-based game for multiple players developed and released by the swedish gaming company Andrimon AB. The game was released in 2010 for iOS and Android and aims to conquer virtual gaming areas, so called zones, through the smartphone's GPS system. The game is free and available in the app store. Turf has recently been accepted as a new form of sport and has contributed to the emergence of several sports clubs, among others in Skåne, Göteborg and Stockholm. The game has been officially launched in nine countries: Sweden, Norway, Denmark, Finland, Iceland, United Kingdom, Netherlands, Germany and South Korea. 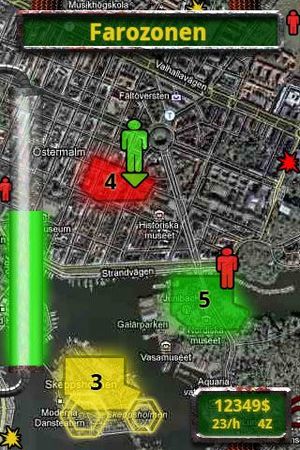 "Back in 2005-2006, before the smartphone-boom, we had an idea about triangulating phone signals to get a position. And then use that position to make some sort of king of the hill game. Later on when the technology took a huge leap forward and it was time to start the process. We tried some concepts that differed a lot from what we can see today. One idea was to divide the entire world into a grid of zones, so that zones were everywhere. A very interesting process that has given us a lot of guidance when new problems has arisen."

Turf borrows elements from traditional orientation and combines these with more traditional game elements, like points, achievement medals and player levels. Scattered all over the world, there are virtual areas, so-called zones, which players can take over and retain to acquire points and compete against other players. Zones are taken over when a player, with the help of the smartphone's GPS system, is in the location of the virtual zone in the real world. Each zone gives the player(s) who take over it a certain number of points, both directly and over time. Turf is divided into game rounds of about one month each. The prize for the winner at the end of each round is, among other things, the opportunity to place your own winner zone on the virtual playing field. The game's progress is updated in real time, which means that all events in the game are updated immediately.

Events are common in Turf, both locally but also at national level. Once a year, an official, independent game round, is organized, a Bonanza, where participants gather in a city and play an independent round for a few hours. A Bonanza can be seen as an official competition or world championship in Turf. The big difference, however, is that there are no requirements for those who participate to also compete against each other. A Bonanza contains special zones that are not included in the regular game and these are much more closely located in a specially marked game area. The first Bonanza was organized on Djurgården in Stockholm on May 21 2011. The second Bonanza was organized in Sundsvall on 10 Mars 2012, the third was in Västerås on the 1 September 2012 and the fourth one was organized in Uppsala on the 20 April 2013.

There are also other smaller competitions that are similar to the Bonanza. One was for example held outside of Elmia in Jönköping on the 19 June 2011 (in conjunction with Dreamhack), and another one in Västerås on the 14 December 2013 (Lusse-Turfen) where you could only use your feet and with densly placed zones. This one is connected with the Saint Lucy's Day (lucia) tradition and has become an annual tradition. After them, a large number of other events have been organized in many different cities with different orientations (canoe, long distances, etc.).

Many expressions and phrases associated with the game have emerged over time. For a more comprehensive list of turf expressions, see the Vocabulary.

A slang term for players in Turf is "turfers". The term turfer is originally derived from the term turfing, which means to play Turf. There are many variants of turfers, including ghost turfing. A ghost turfers is a player who do not have their GPS activated between zone takeovers and thus do not appear on the playing field to a greater extent. Foul blocking is when a turfer has been blocked right in front of a zone by a ghost turfer. Ghost turfing is not a direct violation of the rules, but goes against good practice and is something that is considered by many to be unsportsmanlike behavior.