Finström is a municipality of Åland, an autonomous territory of Finland. The municipality has a population of 2,592 (31 January 2019) of which 93.8% speak Swedish and 3.4% Finnish as their first language. 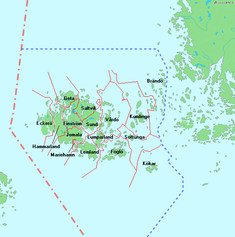 Finström is located on mainland Åland and borders the municipalities Hammarland in the west, Geta in the north, Saltvik and Sund in the east and Jomala in the south.

There are 56 turf zones in Finström, where one is counted as a holy zone.

The most taken zone is GodbyCityZone which is located in the parking lot in front of the shopping center Godby Center in central Godby.