Also worth mentioning are the next two runner-ups: M0112 from Lounais-Suomi/Finland took fourth place and Aicar from Åland/Finland took fifth place. It´s only a matter of time until the Finns beat all Swedes and takes the top positions in the rounds!

Well done to all the winners and all other turfers that fought for their different goals in to the very finish of the round.

All major events are canceled due to the ongoing pandemic, but around the countries, some smaller, local events have been held. I myself have not been visiting any of them and do not have my own report but I have intercepted some rumors that I followed up on and searched for reports on different websites.

The report on this annual event is available on Turf Västerbotten's website:

”The night between Saturday and Sunday 27-28 June, 47 turfers gathered for this year's edition of Midnight Classic in Umeå. The participants, who were divided into foot and bicycle class, came from Luleå, Piteå, Skellefteå, Öravan in the municipality of Lycksele, Vännäs, Umeå, Täfteå in the municipality of Umeå and Uppsala. Among these were both turfers who participated in an event for the first time and experienced turfers with experience from both events and bonanzas. Fun! "

On Turf Skåne's website, you can read about this event:

“The association's first picnic event was held in Skrylleskogen between Dalby and Södra Sandby in the municipality of Lund on 11 July 2020 on a pleasant zone course laid by TXL and MXL. 19 participants took at least one zone in this 30-minute foot heat. Guest turfer JKJE from Gothenburg looked like a winner for a long time, but local turfer grimric found a sweet spot at the end and collected a powerful PPH and with one last take seconds before the event was over, he passed JKJE with 4 points. The battle for third place was just as hard where the Malmö turfer AnneliCH won with 3 points before Cissiliana from Uppsala who received a candy comfort prize. Four junior turfers also participated and all four got candy prizes because children need lots of sugar ;-) ”

Nobody can have missed that it was the 10th anniversary of Turf on July 10th, or?! If you took 10 zones during the day, you were rewarded with a nice cake medal. All supporters' could go into the wardrobe and find a party hat to wear and a party horn to put in their mouth. When you then took a zone, the arms of the avatar went up as usual, but now the party horn was also rolled out! This was really fun!

We were not alone in celebrating, there were posts from turfers in various different social media, hangouts and chats where they boasted with hats and cake medals. Turf Insider received an e-mail from Åland in which their celebration was described:

Some of Åland's turfers gathered in the Algrundet zone in Mariehamn at 6 pm on July 10th 2020 to celebrate Turf's 10 years, and coffee, bubbly drinks, strawberries, sushi, biscuits, cakes, beer, pizza etc. were consumed. The zone was taken a number of times during the meeting, and there was a lot of talk about turf. For obvious reasons, it was nice and warm weather and everyone enjoyed life. 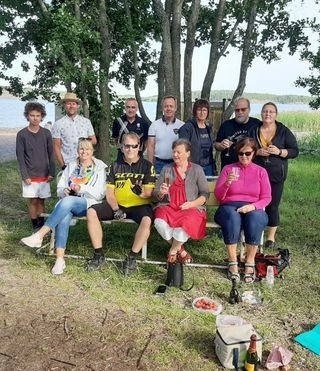 In the group photo we have standing from left: MrCoolWat, Hagan, M0112, Choko, Vontratt, LonelyRider, AnnaB.

Behind the camera stood Alvedon.

Regards Alvedon, who was the one who convened the turf meeting "

On social media, you can read about memories from various turfers from these 10 years. They describe how they started turfing, memorable zone takes and other fun that happened during the ten years that Turf has existed. The app developer company Andrimon, with Drassen and Simon, started everything up and they have gradually expanded and refined the whole concept. From a few isolated zones and turfers to today's almost countless zones and turfers scattered across the globe. If you want to know how the number of zones has changed, you can always go to UrbanGeek's page, and use the tool to scroll back in time and see the zone situation change over the years. It is a great development and a lot of work that lies behind the game development, zoning, corrections and administration of various kinds. Here, Turf Crew has a very big role to play all around. Then we have all third-party developers who have developed statistics pages, challenges and various different mapping tools that provide many different dimensions in Turf.

By the way, did you know that the first official zone was "NackaZone" located east of Stockholm and it was taken by the second registered turfer "hence". The first registered turfer was "felixfelox". More history can be found at: Historik (Swedish) https://wiki.turfgame.com/en/wiki/History (English)

The Kalmar Turf Association invites all Turfers to Kalmar Duo Turf 2020. On September 12, the event will be conducted in two heat, one for walking/jogging during 60 minutes and one for cycling during 90 minutes. The points from both heats are summed up. Read all about the event here.

11 regions have signed up for the multi region battle Sverigekampen 2020, which will take place in September. These regions are now working to fill the teams with fighting turfers, setting up strategies and pep each other. It will be a tough match to win and which region will emerge victorious from the battle remains to be seen. More about it at: https://www.uturf.se/?p=56150

The Turf Bonanza 2020 in Örebro had to be canceled due to the ongoing pandemic and thus there was no distribution of the famous Turf Awards. These are awarded to turfers who excelled in different categories. First, it was a nomination round. It was interesting to see who had excelled and in what way they had done it. Then it was voting that decided who won each category. It was very exciting to find out who had won the different categories. Until now, only a few Turf Crew members have known about the result, but here it is now presented to you all!

Kygni was nominated for being the first and so far only turfer who has taken more than two million points during one round. The fact that he achieved this feat by taking multiple unique and spectacular water- and swamp zones makes this accomplishment much more impressive. He was cheered on by fans and spectators who were able to track his progress on "Turf-TV" during the last 24 hours of round 108.

whitebike was nominated for being a newcomer who has taken more than 3 million points and 17,000 zones in one year, allowing him to advance from from Novice Scout to rank 46 Turf Preacher in 2019.

Turf Crew congratulates the winners! The statuettes will be distributed at Bonanzan in Örebro in May 29, 2021. Don't miss it!

Not going abroad for vacation for most people this year has lead to a bunch of medals for the Turfers. Several big value medals have been seen in the flow at https://turfgame.com/: Sweden Explorer, 10000 Unique, Take-100000 and so on. In the lead of taking unique turf zones is the one and only Snusmumriken who passed 16000 unique Turf zones in July!

If you are restless, you can always find new goals with turf by visiting Sunyour's page with all Missions https://frut.zundin.se/. There are currently 60 different Missions around Sweden and on Åland to take on. Some quirky ideas that have become a reality in the form of both possible and sometimes impossible assignments to tackle.

If you have taken all the zones in your region, is it over then?! No, not at all! Then you make sure that you are registered at https://lundkvist.com/ and start hunting for zones, municipalities, regions in Sweden and the rest of the world! All logged on lundkvist.com!

When I sometimes lose my appetite for Turf and lie on the couch at home, I usually find inspiration from Turf-TV, reports in social media and gossip in the app chat (different regions can be listened to via UrbanGeeks Turf Tuner, here), different groups on Facebook, different Hangouts that you have managed to join. Many different subjects are discussed and you sometimes have to sift among the stories so as not to get tired.

One of the most important channels for me is Instagram where I follow a few different Turfers, here I give some examples: Ventoux (phototurfing) who goes on adventures with his small-wheeled bike, 60-80 and sometimes up to 100 kilometers per day, with zone shots along the way and he documents his turf path with just enough pictures and good descriptive text. Snusmumriken (monost63) in Linköping is also always inspiring to follow with her tireless energy to bike and take zones, unique zones and with pictures of most of the zones! Canon (CanonTurf) in Nyköping has an ability to capture dawn, dusk and other beautiful things in our beautiful country. Tantorange (Dillpion) in Skellefteå is another diligent photographer of turf zones with a nice touch, you get the urge to go back to Skellefteå and the surrounding area and take zones. These were just a few examples, there are many more turfers to follow, search on Instagram for turf!

What inspires you? Submit a note to Turf insider and tell us! insider@turfgame.com

Take care and see you out on the Turf scene!

Proof read and edited by Munin, who was very happy to get a stand-in writer this time :)