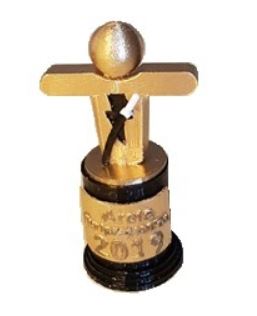 Turf Award Turf Award is awarded to turfers who have made significant or particularly attentive achievements during the previous year or have been involved in an especially noted or spectacular zone takeover. Candidates for awarding the Turf Award are nominated by all turfers who also participate in the final voting to appoint the winners. Turf Award is handed over to the winners by Turf Crew at the yearly Bonanza banquet.

The Turf Awards was introduced 2019 and the first prizes were therefore given for achievements made during 2018.

The four prize categories are:

Best Turf achievement of the year[edit]

Awarded to the Turfer who, for example, got the most gold medals, monthly medals, has taken the most zones, unique zones, regions or equivalent during the past year.

Turf Star of the Year[edit]

Awarded to the Turfer who started turfing as a newbie during the past year and has made the fastest progress.

An open category to nominate a Turfer that exceled in an exemplary way without any connections to an individual Turf performance. This award can be given for anything, for example: efforts to spread Turf, marketing, organizing Turf events or a Turfer who has helped and supported others in a special way.

Most Spectacular Zone Takeover of the Year[edit]

Awarded to the Turfer, who has completed one of the most notable or spectacular zone takes in 2019.

In January, all turfers will be given the opportunity to make suggestions on who should be nominated for the Turf Award in the different categories. A nomination proposal must include nickname and a brief motivation based on nomination criteria.

Voting procedure and announcement of winners[edit]

In February, Turf Crew nominates a maximum of five candidates in each category. During March, all turfers will be given the opportunity to vote for which of the nominees who should be awarded the Turf Award in each category.

The voting score determines who will be the winner of Turf Award. During the Bonanzabanquet the winners will be announced. If the prize winner is physically present they will have the opportunity to leave a short comment.

The prizes were awarded during the Stockholm Bonanza 2019. Here you will find the complete list of nominations for 2018.

Nominated for his incredible turf performance by having taken 4 gold, 1 silver and 1 bronze in 2018 and thereby achieved very high rank in a short time.

The Turf Star of the Year - Ghost63_Ume[edit]

Nominated for taking the first zone in mid-May and then achieving to rank 44 Turf Hero in 2018 and by straight victories climbed from league 10 to league 3.

The Turfer of the Year - SunYour[edit]

Nominated because he has given all Turfers more motivation and goals to reach with their mission spirals and letter rally spread throughout Sweden and Åland.

Most spectacular zone take over of the Year - Florence & Entertainer[edit]

Nominated for have paddled along the far end of the Stockholm archipelago with a definite goal to take the FarEast zone, which is a big achievement and shows turf-related devotion. They also took the FarWest zone during the same round.

Nominated for being the first and so far only turfer who has taken more than two million points in one round. The fact that he achieved this feat by taking multiple unique and spectacular water and swamp zones makes this accomplishment much more impressive. He was cheered on by fans and spectators who were able to track his progress on "Turf TV" during the last 24h of round 108. (126 of 235 votes = 53,6 %)

The Turf Star of the Year - whitebike[edit]

The Turfer of the Year - HappyF[edit]

Nominated for providing the excellent and constantly evolving statistics site turf.lundkvist.com. (96 of 220 votes = 43,6 %)

Most spectacular zone take over of the Year - Kygni[edit]

The awards were awarded during the Örebro Bonanza 2021 on the 4th of September in Örebro. Here you will find the complete list of nominations for 2020.

Nominated for having an average of over 400 takes per day during an entire round having taken 11,249 takes and won a gold medal in October. The average “saddle time” was 12 hours and 12 minutes/day.

The Turf Star of the Year - féarglas[edit]

Nominated because she – from having never been turfing before – went straight into the top 10 on the world list in August and stayed there for the rest of the year. In November and December she received silver medals.

The Turfer of the Year - féarglas[edit]

Nominated for her fantastic efforts in radio and international television to spread Turf throught the UK. She clearly wanted to spread the joy of something she seems to love. She has been awarded the Heavy Expandator medal for her efforts.

Nominated for having taken the SweHeaps zone at Svenska Högarna, which required five days of paddling in Stockholm's outer archipelago. A truly impressive and inspiring TurfTour!

The awards were be awarded during the Västervik Bonanza 2022 on May 21, 2022 in Västervik. Here you will find the complete list of nominations for 2021.

Turf Performance of the Year - Király and hdaskydrone[edit]

Király was nominated for breaking records in the number of points during a monthly round with 2,453,618 points. (44 of 169 votes)

hdaskydrone was nominated for having cycled the long distance between the Three-Country Cairn (Treriksröset) and Smygehuk, which corresponds to approx. 2050 km. (44 of 169 votes)

Turf Star of the Year - Welshman[edit]

Nominated because he started as a newbie in January 2021. In just seven rounds he won one silver medal, four gold medals and one bronze medal, He achieved rank 54 in those 7 rounds and gained over 9 million points. (61 of 173 votes)

Turfer of the Year - UrbanGeeks[edit]

Nominated because he via Turf Map Tools gives us almost indispensable tools to find the best route to new zones and make the best route for turf rounds etc. (56 of 166 votes)

Most Spectacular Zone Takeover of the Year - gerald_flux.rc and recycling[edit]

Nominated for taking the zone SmygeFyr after a 2000+ km bike ride through Sweden. Both turfers took SmygeFyr within a week from taking the zone Riksgränsen in northern Sweden. (72 of 166 votes)